East Ilsley is particularly lucky in that a full set of detailed Overseers’ accounts survive covering the period from 1744 to 1796. There is an on-going project to transcribe all of the surviving Poor Law records from the 18th century – these include detailed overseers’ accounts (as in the example below), summaries of the amounts paid out and taken in as poor rate, and a rate listing all of the people who paid into the scheme.

Records of the Poor Law are particularly valuable in looking at the lives of people like agricultural labourers, who leave few other records of their lives. During the 18th century, the Poor Law effectively was the locally administered welfare system. Widows and orphans, the elderly and the sick were all supported by the local poor rate if they had no other form of income. In cases such as orphans or the elderly, this takes the form of regular payments in cash and occasional payments in kind, e.g. clothing. Ad hoc payments and payments for work (repairing the roads, for example) were often made to labourers during the winter months when they had insufficient work to feed their families.

The first book of accounts was found by chance in the parish chest in St Mary’s church in 2007. Each page was photographed for transcribing, and has now been deposited in the Berks record office. The remaining 3 books are in the record office (ref.  DP 74/12/1-4) and accessible only via microfiche copies, which are being used for the transcriptions.

Three books of overseers’ accounts are now available to view/download, covering the periods 1744-1752 (Book 1), 1752-1760 (Book 2) and 1760-1770 (Book 3). The remaining book is in the process of transcription and will be uploaded here when completed. This last book covering 1770 to 1796 is much larger than the earlier books – approximately half has been transcribed so far. 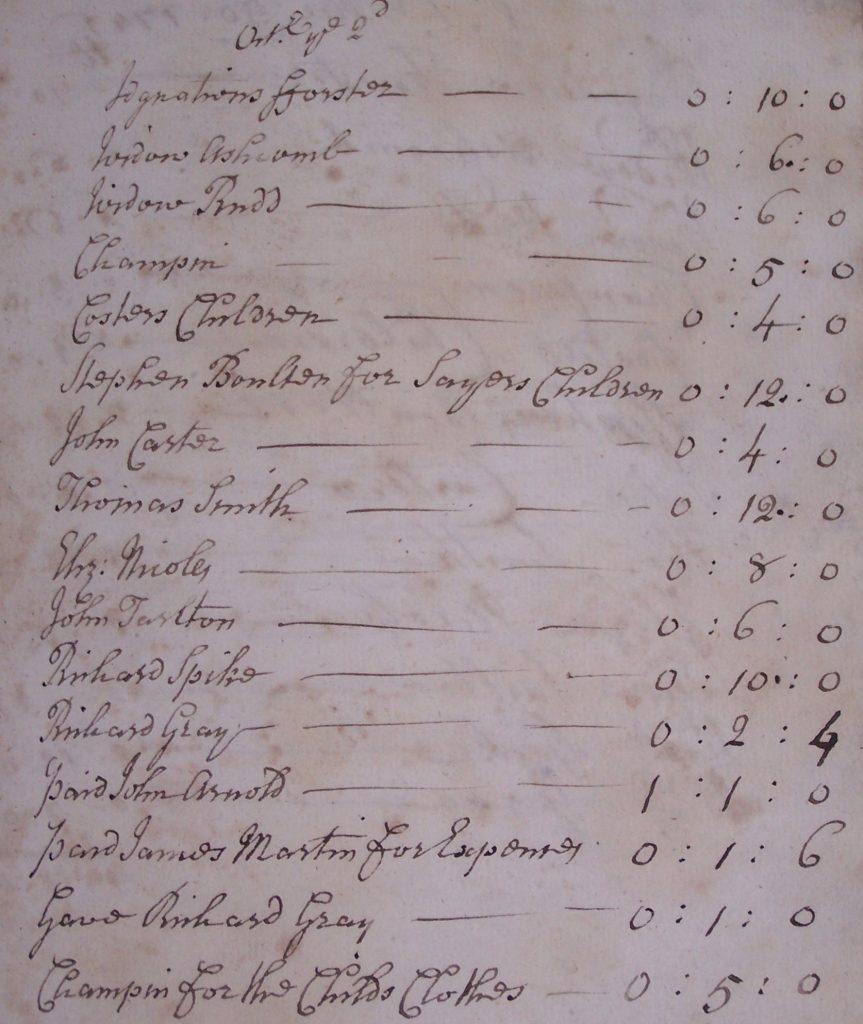 Notes on some of these entries:

Poor rate:
Only one example of the poor rate (for 1765) has survived – Berks Record Office reference – [D/P 74/12/1 – MF 93672 fiche 3], but it gives a good indication of the way in which poor relief was paid for by the village. It was effectively a local tax levied on the inhabitants of the village, based on the rentable value of their houses and property. For East Ilsley the rate was at 1 shilling to £1 for houses and land, plus 1 shilling for £10 of stock for tradesmen. Not everyone paid the rate – for those where the rate would be 2 shillings or less, it was not mandatory but some did pay, possibly because this would help to determine whether they were deemed to have legal settlement in the village.
The poor rate document lists all of the people in the village liable to the rate, as well as those not liable, so is a useful mini-census of the heads of household in 1765. There are 95 individuals listed in the rates but 47 did not pay (due to pay 2 shillings or less). Quite a no. of these 47 names appear in the overseers’ accounts as receiving relief at some stage. Of the remaining names, just 6 people account for nearly 60% of the total money raised.

The Overseers’ accounts books also give us an insight into events affecting the whole village. For example, in 1753 there was a smallpox epidemic in E. Ilsley, which resulted in the death of about 20 people and probably affecting 50-60 people. A detailed summary of the epidemic is available in the download section below.