Archaeological digs are what most people think of when you mention archaeology, but these tend to be the last piece in the puzzle after studying old maps & documents, carrying out earthwork surveys and geophys surveys. But sometimes it’s worth doing a small scale dig just to check what’s there, particularly if there are other clues.

A small scale dig on the site of the Lamb Hotel has been carried out. This old pub (demolished in 1966) had numerous outbuildings shown on old maps and remnants of old brickwork are still visible in the boundary walls of the current property. Excavations made during repair of part of this boundary wall threw up lots of building rubble and some indications of surviving brickwork in the soil, which prompted the selection of the specific dig area. 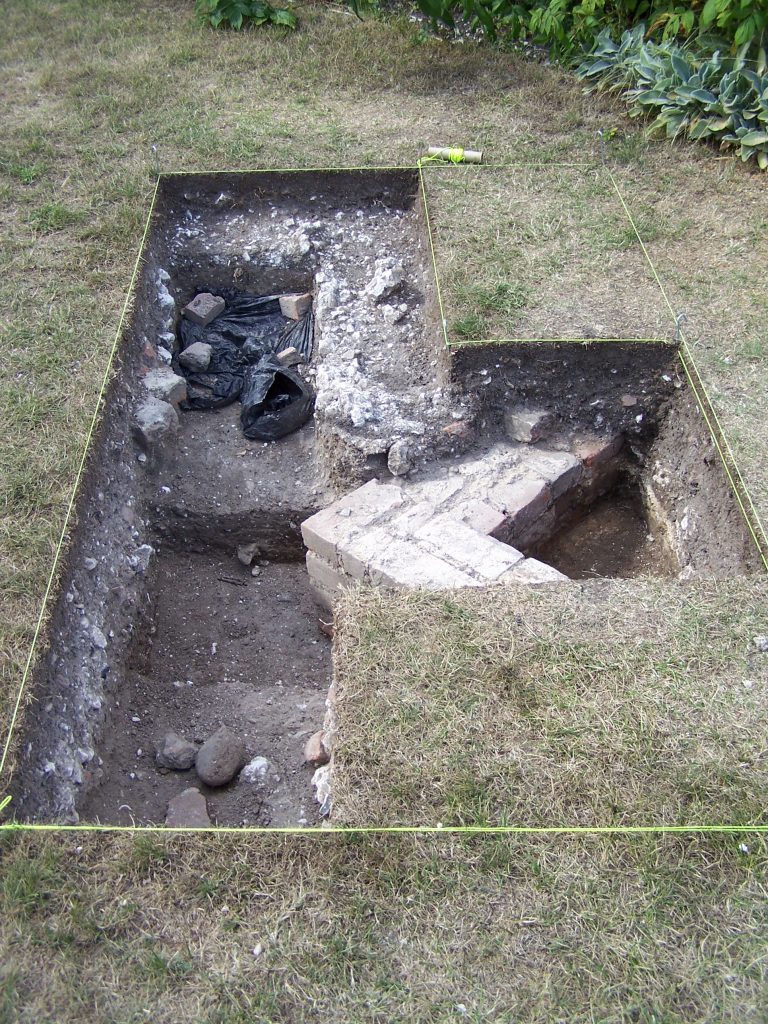 The dig uncovered the corner of one of the original outbuildings seen in earlier maps – a substantial brick-built building with a packed chalk floor that dates from the late 19th century. Outside this building was another packed chalk floor in a less substantial building, with a distinct chalk-lined gulley running through it.
Underneath the demolition rubble and the chalk floors was a thick layer of clay with flints. A few pieces of rough pottery found in this layer were identified as being local medieval coarseware dating back to a period 1250-1500. The pieces found were too small to narrow down the date range, but it does show that the site was in use in the medieval period.

As you can see from the photo, the trench was relatively small and shallow (about 2m by 2m by 1m deep). It would be worth investigating the clay layer to a greater depth in search of more examples of medieval pottery.

If you have a particular interest in this work, a much more detailed report of this dig is available. Please contact us by e-mail using this link if you would like a copy.