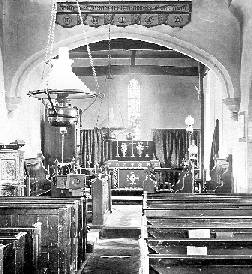 The font is in the N aisle to the W of N doorway – it was moved here from the ringing chamber in 1957. On a modern octagonal stemmed plinth sits a shallow tub-shaped bowl roughly carved with four large recessed panels, leaving four shallow vertical strips slightly proud of the surface. On top of this sits the font proper, an unlined octagonal tub, very much repaired, carved with a simple round-headed relief arcade, one bay on each face. The flat columns supporting the arches have boldly projecting rectangular capitals or imposts. Around the rim is a chamfer, and around the bottom of the bowl, a double roll on which the columns stand.

A booklet has been produced on the history and architecture of the church.

The West window in the north aisle depicts three figures closely connected with this part of England; St. Osyth, Alfred the Great and St. Frideswide. One of the North windows shows three of the Oxford Reformers, Dean Colet, Sir Thomas More and Erasmus. The other North window shows the three Archbishops of Canterbury, Lanfranc, Thomas a Becket and Anselm. The East window of the North aisle shows three early bishops, St. Swithun, St. Aldhelm and St. Birinus.

The subject of the west window is ‘Christ blessing little children’.

The Society publishes a booklet about the stained glass windows and the story of each of their subjects. 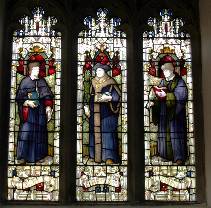 The fragment of the memorial brass to Margaret Hildesley , known as the Hildesley brass, was originally on the floor of the nave. The fragment is the remaining part of a brass, originally comprising the inscription and the figure that surmounted it. The brass was still in its original place in 1844 when William Hewett jnr. included an illustration of it in his ‘History & Antiquities of the Hundred of Compton, Berks’.

The origins of the brass have been researched and a booklet is available, which describes that research. The painstaking work leading to the construction of a full-size replica of the Hildesley brass is described in the leaflet.

The Burial Registers for St Mary’s church, East Ilsley, go back 350 years, with Bishops transcripts surviving from as early as 1608. The church itself is more than twice that old, although it is not certain that it is the same church mentioned in The Domesday Book. Burials, prior to 1608, when regular records were first kept, must have taken place in and around the church. In the front of the burial register 1813-1868, there appears a list of, “regulations [that] must be agreed previous to the Rector’s consent to any persons being buried in the Parish Church or Chancil”, but there is no visual evidence of such burials that late. These regulations included the following, “ The Corpse to be enclosed in a Leaden Coffin & the Vault or Grave to be built of Brick or Stone arched over with brick – at least 2 feet and a half below the level of the Floor from the Top & the Earth well rammed upon it. Persons dying of Small Pox or any other infectious disorder will not be permitted on any Terms to be interred in the Church or Chancil”. A fee had to be paid before the ground was broken, and damage during excavation to a vault or grave had also to be paid for. No vault was to be opened without a fee.  The earliest surviving monumental inscription inside the church is that of the wife of William Hildesley from 1606. This is part of a brass that once marked the place of burial in the nave aisle.

The Burial Records from 1608 to the present day record about 2,850 persons buried at East Ilsley. Today only about 350 graves are visible. Not all of these have means of identification, and some stones have been moved from their original positions.

About 1960 the area to the east of the church was ‘tidied up’ and around 140 stones were moved to the north and east perimeter wall. Others were set in artificial rows. I have found footstones around the perimeter wall belonging to graves in various other parts of the churchyard. These are indicated and cross-referenced where possible.

There are stories of plague burials having taken place on the western side of the churchyard. The solitary memorial to Frogley Cox is all that breaks the emptiness of that area. The ground has remained undisturbed and no burials have taken place on that side in recent times. Hewett writes in his book ‘The Compton Hundreds’, ‘It is commonly reported that the great plague reached Ilsley, and cut off half the inhabitants, who were buried in a pit at the west end of the churchyard. We cannot expect to find all of the deaths recorded during such an awful visitation, but the following entry corroborates the tradition: “1664, William Huet buryed January 18th, att night”.’

Hewett also states that, “Between the church porch and the gate, stood formerly two venerable yew trees of considerable size, long since destroyed”. Since this was written, the north aisle has been added to the church in 1845. The trees may have been removed to make way for the extension. The porch that he mentions is therefore not the present one. The Darling Tomb to the left of the present porch predates the north aisle itself and was therefore originally a short distance from the church.

The churchyard was at one time half the size it is today. This can be seen on the tithe map of 1844. There are two reports of the consecration of extensions to the churchyard, the first in 1867, and the other, in 1900, which produced the present size and shape. An examination of the perimeter wall on the SW, S, and SE sides, shows clearly which is the new ground. From a brick column midway along the eastern boundary, the wall has a distinctive stepped brick coping and must have been built around the beginning of the 20th century, when the school next door was built. The wall incorporates a brick built hut in the SE corner, and a nearby gateway.

The older wall on the west side is of flint, capped by a brick coping, and may have been part of the barns that once stood there (see 1844 map) as part of Church Farm.  In 1892, a meeting discussed the crowded state of the churchyard, but it was not considered necessary at that time to take steps to acquire fresh ground for enlargement.

This image was produced by superimposing three separate maps:

Extension consecrated in 1900 The outline in Blue shows the extent of the churchyard in 1910. (O.S. Map)