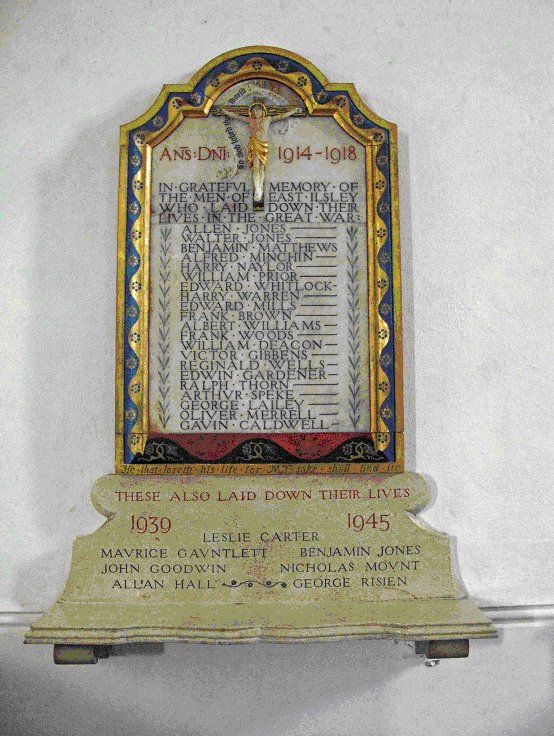 On Sunday, 24th July 1921, being the day fixed for the unveiling of the war memorial tablet in St Mary’s Church, the old world village of East Ilsley was a scene which will not easily be forgotten, either by those who actually took part in the proceedings or the young children who looked on.

Punctually at 5.30 pm, about 50 ex-servicemen of the village, together with the village band, paraded in a small space opposite the Post Office, and at 5.40 Lieut. Col. H.W. Naylor (retired) marched the party to the Church.  The unveiling of the tablet was performed by Brigadier General E.S. Burder, who in a clear and distinct voice, solemnly and impressively read out the names of the fallen comrades.  Names familiar to all, for were they not the sons, husbands or brothers of some of the 300 odd people present in the congregation.  No fewer than 21 out of a population of about 400 in the small village fell in the war.  Never in the memory of a very old inhabitant and regular church-goer has the old church been so filled with people.  To see the gallant ex-servicemen with their band, all wearing their medals or ribbons, marching in a perfectly regular and soldier-like manner, to listen to a most impressive church service, to witness the unveiling of the small but beautiful tablet with the names of our glorious dead inscribed thereon, will surely never be effaced from the memory of even the smallest school child present.  After the service the “Last Post” was sounded, and the people quietly left the church.  The ex-servicemen headed by the band marched back to the parading place, where, standing to attention, the National Anthem was played, after which they were dismissed.

Truly a glorious chapter in the history of this dear old village of East Ilsley.

When the anonymous correspondent wrote this account for the Newbury Weekly News in 1921, he meant, of course, that it wasn’t just the names of the fallen men that were familiar to all, but that everyone in the village knew them, or at least knew who they were. Now, with the passing of time, there is nobody left who knew them; and only a few who knew those whose names are on the additional memorial tablet for the Second World War.

The names, though, are familiar to anyone who has ever spent any time in St Mary’s Church looking at the War Memorial. They were certainly familiar to me as a child when, bored at Sunday morning services, I would gaze at the beautiful plaque in awe and silently recite the haunting roll call. I had no idea who any of them were, even though some have proved to be my own relatives.

Returning to East Ilsley after years living away, there were the old familiar names on the War Memorial. Here is the result of my attempts to find out who they were, and to tell their stories, so that once again they may be “names familiar to all”. And not just names, but people. People who walked the Ilsley roads and tracks, went to school here, to the church or chapel, worked on the farms or in the racing stables, drank in the pubs and lived in the houses and cottages of East Ilsley.

The tablet bears the inscription:  “To the Glory of God, and in grateful memory of the men of East Ilsley who laid down their lives in the Great War”.

The following were the names of the fallen:

With all its sadness there was an atmosphere about the Downland that you had never really grasped before – an atmosphere of simple heroism that brought the sense of an unseen glamour over the great rolling hills and the clustering villages. From God’s wide, open country, from the little thatched cottages, from the lonely, remote habitations of the Downs, steadily true to their unobtrusive, silent nature, the men had gone forth cheerfully to give their lives for freedom – for home!

They were men of the open Downland, men who had something of the unfathomable mystery of the wind-swept Downs in their very being. The world had never known that they were heroes all the time, but had sometimes scorned them as country yokels. But the world outside never understood them aright. Like the Downs themselves, they held the secret of their lives in taciturn silence. But God meant the outer world to know the worth of His Downland children.

Victor L. Whitechurch (Vicar of Blewbury before the Great War) from Downland Echoes, 1924