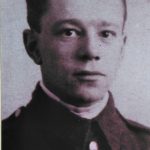 Robert Arnold was born in Fulham, London in 1896, and was orphaned by the age of eleven. When the census was taken in 1911 he was working as a stable lad at Chitterne in Wiltshire.

In 1914 he went to work for a Major Edwards in Cashel, Co. Tipperary where he was employed as a groom. In December 1915 he enlisted as a horsekeeper at Woolwich and was sent to the Army Veterinary Corps. In 1917 he was transferred to the Duke of Wellington’s West Riding Regiment.

As a result of bravery whilst on active service in Italy in June 1918, he was awarded the Military Medal.

He was demobilised in February 1919 and returned to Ireland for a short time, but by August was in London. He then worked in racing at various places, including Wantage and Chilton, during which time he met Evelyn Daisy Gee and they were married in 1925. Robert Arnold and his growing family then settled in East Ilsley where he worked for the trainer George Todd at Nelson House Stables.

Robert died in 1962 and his wife in 1988. They are buried together in East Ilsley churchyard. 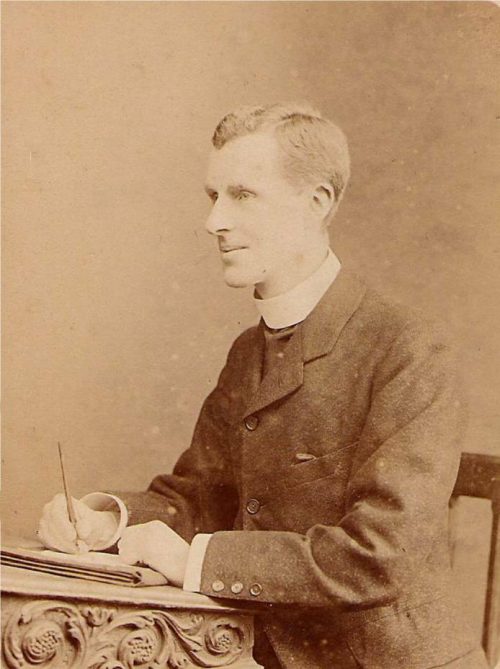 The Rev. William Caldwell was Rector of East Ilsley from 1913 to 1916.  Born in Melbourne, Australia, he was well-connected in military circles, being the nephew of Field Marshal The Viscount Wolseley and General Sir G.B. Wolseley.

Mr Caldwell left East Ilsley in 1916 to become a Chaplain to the Forces in Egypt. He relinquished his commission in 1919 and then became Rector of Fetcham in Surrey. His only child Gavin was killed in action in 1918 and is commemorated on the War Memorial, although oddly he was not included on the Roll of Honour.

Willie was the principal stable jockey. He was called up in 1916 to serve in the Army Veterinary Corps, where men skilled with horses were much in demand. Willie’s experience was broadened when he was posted to Egypt and  found himself in charge of camels. He married William Sneller’s daughter Kathleen in 1915 and they had one daughter, June. They all lived at Montpelier House in Broad Street to the end of their lives.

Harry enlisted in the 19th Hussars a month into the war.  He served in France until 1917, when his leg was badly broken in a motorcycle accident which effectively put an end to his military service. He was eventually discharged as permanently unfit a few weeks before the Armistice. This coincided with the death of his father, and Harry took over the stable.  He trained racehorses in East Ilsley for many years and married the daughter of a trainer from East Hendred.

The war brought tragedy to the East family when Ralph Thorn was killed in France.  He was the husband of Ethel, James East’s eldest daughter.  His name is on the War Memorial, but not on the Roll of Honour. 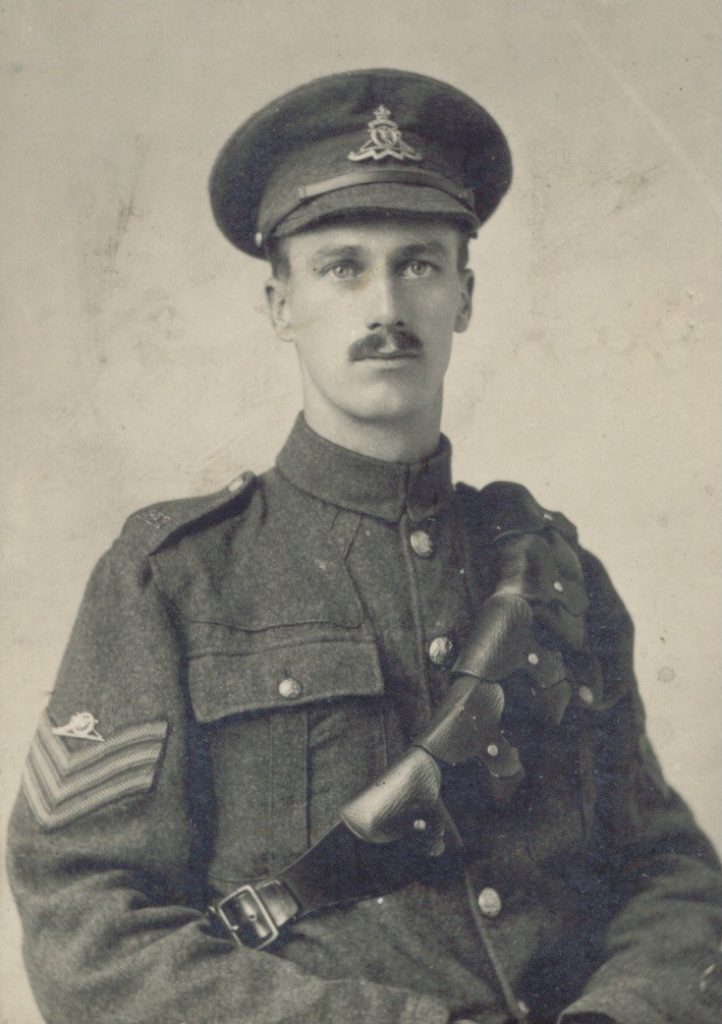 Tom Goodwin was already serving in the Royal Field Artillery and was based in Ireland when war was declared. Landing in France in early September, he served on the Western Front throughout the war. He met and married his first wife Margaret while serving in Ireland, and they had two children. After the Armistice Tom was posted to India, where his son John was born. In 1922 the family returned to England but sadly Margaret died soon after. Tom later married his second wife Rosina, and they had six more children born at British Army bases abroad. They subsequently lived in Warwickshire and for a time in the USA. His eldest son John was killed in action in the Second World War. 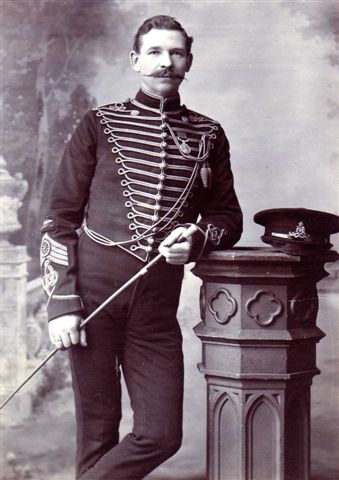 William Hibbert (known as ‘Buffer’) was a carpenter and wheelwright by trade, having served his apprenticeship at Bakers of Compton. He joined the Army in 1894, enlisting in the Royal Horse Artillery in which he served for twenty-two years, ten of which were spent in India. Buffer married Lottie Hamm, whose mother ran the village shop and bakery, and she accompanied him to India where their two sons were born. In August 1914 Buffer was serving in Ireland; he was posted straight to France where he served until 1916 when his time in the Army expired.  Back in Ilsley, he ran the bakery and shop with his wife. He was also churchwarden and captain of the bell ringers, as is his grandson John today.

Ted Merrell was too young to enlist at the beginning of the war, but that did not stop him trying. He was eventually accepted by the Army Service Corps to work in its Forage Department. This involved collecting hay and feed  from local farms for the Army’s horses and mules. A year later Ted enlisted in the regular Army and served with the Royal Lancaster Regiment. In addition to his Victory and British War Medals, he earned the General Service Medal for service in Iraq following the Armistice. He married in 1923 and had four children. Ted’s father Oliver died while serving in the AVC and is commemorated on the War Memorial. 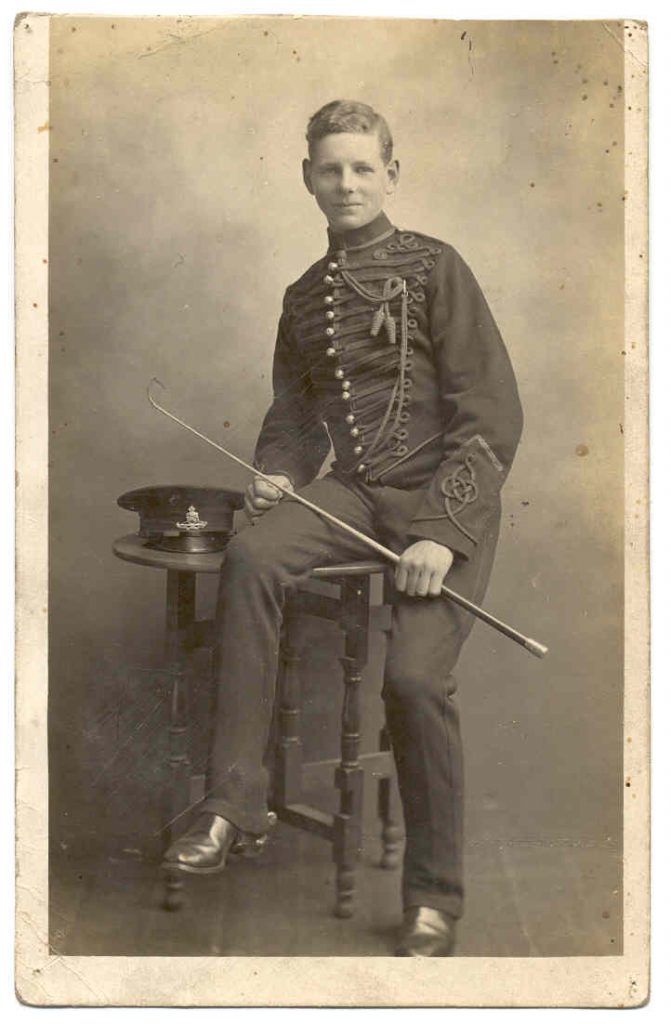 Jim Naylor was the son of the third of the Hibbert sisters, Bessie, and her husband, an officer in the Royal Horse Artillery.  At school in England while his parents were in India, Jim joined the Royal Artillery as a cadet two years before the outbreak of war, and in August 1914 he was a boy trumpeter based at Woolwich. Two weeks later he was in France. He took part in many of the major actions of the war, and was commissioned in 1917. Jim remained in the Army after the war and rose to the rank of Lieutenant Colonel. He was one of the veterans interviewed  by the war historian Lyn Macdonald, and some of his experiences are recounted in her books about the Great War.

Sadly Jim’s elder brother Harry was not so lucky, and was killed in action early in the war. 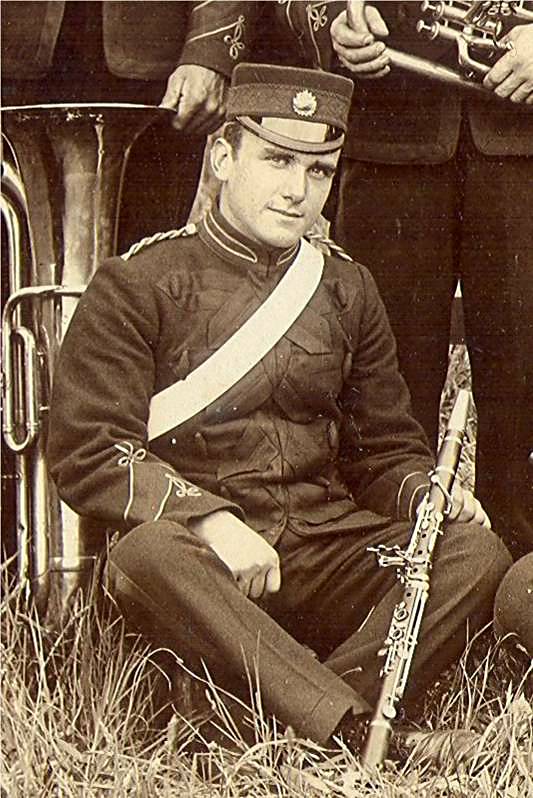 Harry Pearce followed his father and grandfather as a master saddler and harness maker in East Ilsley. Their shop was in Abingdon Road and is now part of Folly House.  Harry had served with the Berkshire Yeomanry before the war. As the British Army relied heavily on horses for transport, Harry’s skills were very valuable and his service with the Royal Field Artillery as a Corporal Saddler took him to Egypt, Salonika and Georgia.  He had married Bessie Horsman in 1911 and their son was born a year later. Later widowed, Harry married Tom Goodwin’s sister Edith. 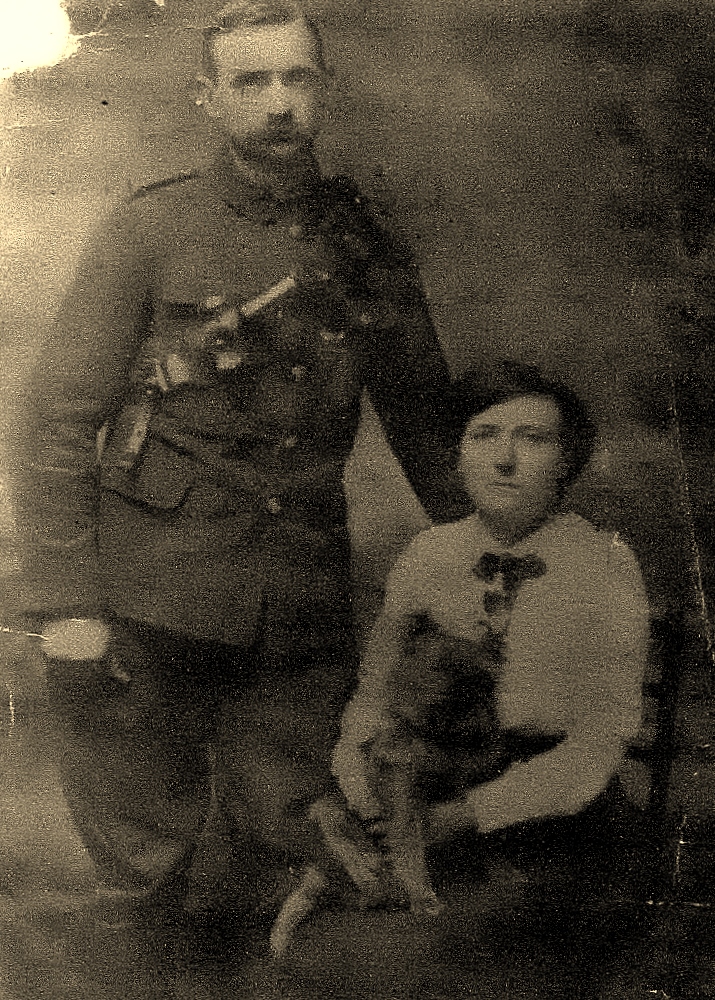 After a brief spell in the Royal Berks Regiment in 1897, George Rumble returned to East Ilsley and became a baker. He married Florence Bridgewater in 1898 and moved to Shinfield, Reading. They had 7 children when, at the age of 40, he enlisted in July 1916 in the Royal Regiment of Artillery. He was posted to Portsmouth where he trained as a gunner. He was demobbed in March 1919 and transferred to Class “Z” army reserves. In 1922 he applied to join the “D” reserves. He died in 1935. 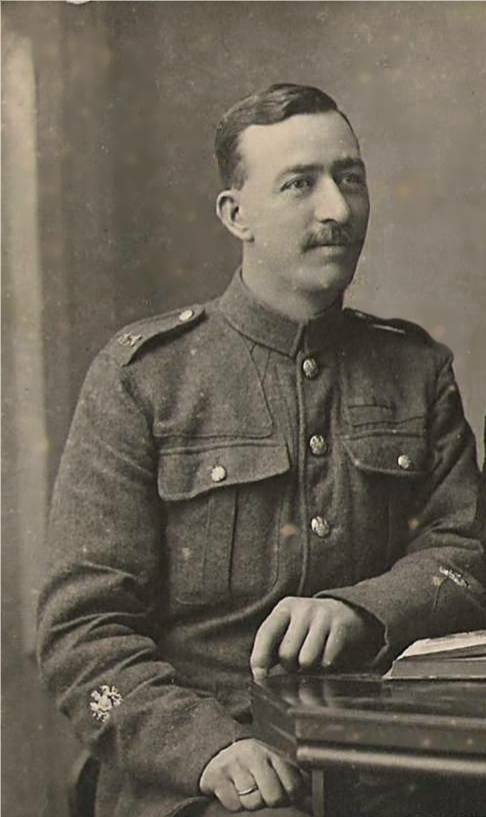 Born in Sheerness in Kent, Jim Sanderson joined the Army in 1900 and served in the Boer War with the Army Service Corps.  Like Will Sneller, he met his future wife while on a posting to Churn Camp. She was Nelly Hibbert’s younger sister Florrie, and they married in June 1914. When war was declared a few weeks later, Jim was the first NCO to arrive in France, landing on August 9th.>

In 1916 Jim was awarded the Distinguished Conduct Medal “For consistent good work as Chief Clerk to the Assistant Director of Supplies throughout the campaign”. Jim and Florrie  lived at Florence Cottage (which was named after her) and had two children.  Jim was the Registrar and Relieving Officer for the district. He was also a useful cricketer, keeping wicket for Kent 2nd XI. 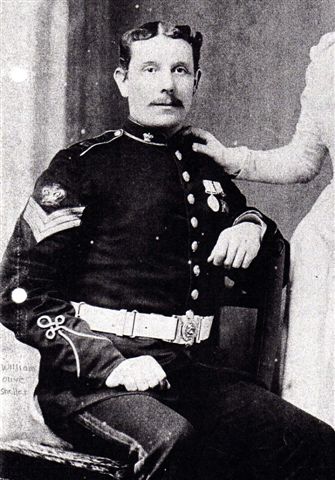 Will Sneller was a career soldier. He was born in Dover, Kent, and enlisted in the Ordnance Store Corps (later the RAOC) in 1881. Posted to Churn Army Camp, on the Downs above East Ilsley, he met Nelly Hibbert, whom he married in 1892. They had four children. Will served in the Boer War, after which he left the Army and settled down in Ilsley as landlord of the Swan. In November 1914 he re-enlisted in the Ordnance Corps, serving in France and later in charge of the ordnance depot at Didcot.  Will Sneller held the rank of Conductor, the most senior appointment that can be held by a warrant officer in the British Army. 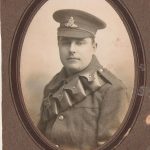 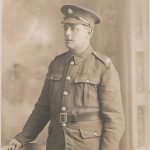 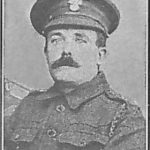 Sons of Mark & Annie Wells, these three brothers all served in the Army: Harry in the Royal Field Artillery, Herbert in the Army Service Corps, and Raymond in the Royal Fusiliers. Their brother Rex was killed in action in 1917. Raymond married and went to London, where he pursued a career in the printing industry. Harry, who like his father was a butcher, married and had one son, Dick, whose widow Jean lived at the family home, Under Ridge, until her death in 2015. Herbert was a musician and composer who taught piano and organ. He never married, and lived with his younger brother and sister in a cottage in Cow Lane which stood between Yew Tree and Leighton Cottages.

George Wood was born in Birmingham, where his family was in business hiring out horse-drawn cabs and carriages. George preferred riding horses to driving them, and he left the city to work in racing stables in East Ilsley. In 1914 he married Nell Williams, whose family had been in the village for many generations, and they had two sons. They lived in one of the Hall Cottages in Broad Street (now a single large house). Along with many other stablemen, George served with the Army Veterinary Corps as a horsekeeper during the war.  Afterwards he returned to the racing industry, and in later years worked for the trainer George Todd at Nelson House.