Allen John Jones was born in 1885 in Skenfrith, a small village in Monmouthshire on the River Monnow which marks the border with England.  He was of mixed Welsh and English ancestry, and grew up with his parents, sister and three brothers amid the beautiful countryside of the Welsh Marches.  After a spell working on a farm near Pontypool, Allen joined the Army in 1905, enlisting at Newport in the Welsh Regiment.  He served with them in South Africa before returning to the UK in 1910.

Meanwhile his eldest brother William had married and moved with his wife and young daughter to West Ilsley.  While visiting his brother in Berkshire, Allen met Winnie Elliott, whose father Eli was the baker in East Ilsley.  The Elliotts lived at West End House in Fidlers Lane.  Allen and Winnie married in 1913 at the Baptist Church in East Ilsley.  Their daughter Norma was born a year later, but tragically her father was never to see her.

Allen’s battalion was mobilised at Bordon on 4 August 1914, and he landed in France on the 13th, the same day as Alfred Minchin, Harry Naylor and Willie Jones.  After Mons and the battles of the Marne and the Aisne, they were in action in October at the First Battle of Ypres, where Allen was fatally wounded during the advance on Langemarck.  His death was reported by the Newbury Weekly News on 12 November:

DEATH AT THE FRONT

The news was received on Friday evening last of the death of Sergt. Jones, who was killed at the front in the recent fighting.  The deceased, although not a native of West Ilsley, was well known here, and was a frequent visitor to his brother, Mr. W. Jones, and less than a year ago he married a daughter of Mr Eli Elliott of East Ilsley.  Sergt. Jones was a non-com of the Welsh Regiment, and was a good soldier, as evidenced by the prizes he won for shooting, etc.  He was also proficient in signalling and was attached to the staff when leaving for the front.  All honour!  he died fighting for King and Country.

Four more years of warfare over the same ground meant that Allen’s grave was lost, and he is commemorated on the Menin Gate in Ypres.  His name is also recorded on the War Memorial in Skenfrith. 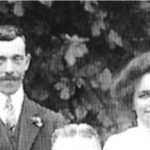 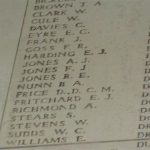