Walter “Willie” Jones was the first of the men on the East Ilsley War Memorial to fall – but his family and friends had to wait nearly a year for the news they dreaded after he was posted missing just three weeks into the war.  Willie lost his life in one of the most heroic stands of the war.  Outnumbered six to one, a single under-strength battalion held up the German Army for fourteen hours, enabling the British to complete their withdrawal from Mons.

Willie was born in about 1884 in Daglingworth, Gloucestershire, into a large family who by 1901 had moved to Charlton, Wantage.  He worked as a blacksmith before joining the Army.  His elder brother, Edgar, lived in Cow Lane, East Ilsley with his wife and children, and it may be that Willie joined them there after completing his service.  As a pre-war regular soldier, he was one of the first to be called up, as the Newbury Weekly News eventually reported on 8 July 1915:

Jones, 2nd Royal Munster Fusiliers, was reported missing, has now received the sad official tidings that he was killed in action, but the date and place is not given.  Deceased had previously served in India for six years with the 1st Royal Munster Fusiliers.  He was called up on August 4th, joined the Second Battalion of his regiment at Tralee, Ireland, spent a few days at Aldershot and left Southampton on August 13th.  His name was published amongst the missing immediately after the retreat from Mons

The date was 27 August 1914 and the place was Etreux.  These are the words on the plaque at the small cemetery there where Willie lies:

“The action is likely to become the classical example of the performance of its functions by a rearguard.  The battalion not only held up the attack of a strong hostile force in its original position, thereby securing the unmolested withdrawal of its Division, but in retiring drew on to itself the attack of very superior numbers of the enemy.  It was finally cut off at Etreux by five or six times its numbers but held out for several hours, the regiment only surrendering when their ammunition was practically exhausted and only a small number of men remained unhurt.  The survivors were warmly congratulated by the Germans on the fine fight they had made.  No other claim to a memorial near Etreux is likely to be advanced – certainly nothing which would not take second place to the Munsters.”

Willie is also remembered on the Charlton War Memorial.

The war memorials in Wantage have been researched by Trevor Hancock who kindly contributed the photographs of Etreux War Cemetery.  Trevor also managed to track down and acquire Willie Jones’ “death penny”.  These bronze memorial plaques were issued to the next-of-kin of all service personnel of the British Empire who lost their lives in the First World War. 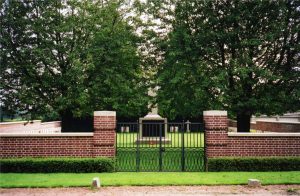 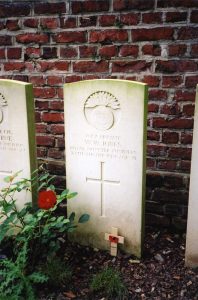 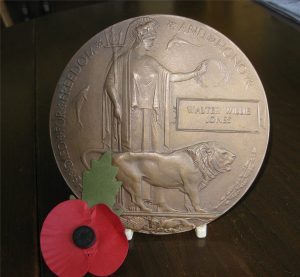