Edwin Boyce Vine Gardener was born in 1898 in Kent.  He was named after his maternal grandfather, Edwin Vine, but he was known as Ted, as this is how he is listed on the East Ilsley Roll of Honour.  Ted arrived in Ilsley in 1912 when his father, William, took over the licence of the Star Inn.  He worked as a stable lad and apprentice jockey.

When war came, Ted tried at least twice to enlist in the Army, but was rejected, probably because he was too young.  He was finally successful, attesting at Newbury on 6 December 1915 and giving his age as 18 years 6 months.  (He was actually a year younger.)  Ted’s employer didn’t want to let him go and successfully applied for exemption, but Ted was eventually called up in August 1916 and posted to the 9th Battalion of the Royal Berkshire Regiment for training.  This was a Reserve Battalion which provided reinforcements where needed, and so it came about that Ted was drafted into the Royal Inniskilling Fusiliers.

The Third Battle of Ypres, often referred to as Passchendaele, was fought in the wettest summer and autumn for seventy-five years.  The low land of Flanders became a sea of mud as the drainage channels dissolved under the bombardments.  On 16 August, the opening day of the battle of Langemarck, Ted’s battalion, the 8th Royal Inniskilling Fusiliers, was tasked with the capture of Borry Farm, a German strongpoint.  It proved to be strongly garrisoned with 100 men and several machine guns.  The battalion had been in the front line for two weeks already, and the men were exhausted: the losses were heavy.  From the C.O.’s report:

I attribute failure on my FRONT to following factors-

BORRY Fm. was intact & strongly held, and no fresh troops were at hand to press forward & take this place. The surrounding ground was very much cut up & wet & rapid movement was impossible. Many casualties were suffered throughout the day from garrison at BORRY Fm. from whence fire was FRONTAL & ENFILADE.

The CWGC records 113 men in Ted’s battalion who were killed on that day.  Of these, only 14 have known graves.  The others, including Ted, are commemorated on the Tyne Cot Memorial.  Many of them may lie in the cemeteries around Ypres, under headstones inscribed “A Soldier of the Great War – Known Unto God”. 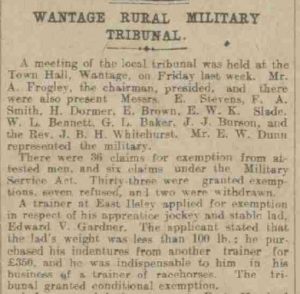 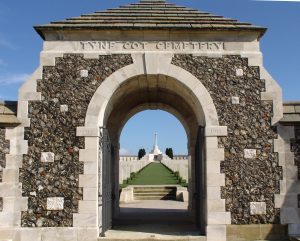 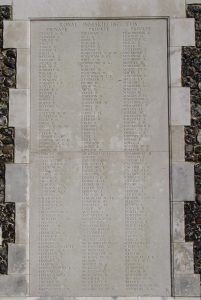