Reginald George Wells (Rex) was born in East Ilsley in 1887, the youngest son of Mark Wells, the butcher, whose shop stood in the High Street on what is now the car park of the Crown & Horns.  The Wells family was a large one, originating in West Ilsley, and besides his six brothers and two sisters, Rex had many relatives in both villages.  He followed his father into the butchery trade.  In 1911 he married Elizabeth Balls, the daughter of an Essex farmer who had moved to Hampstead Norris.  Elizabeth was a teacher at the school in East Ilsley. Their son Rex was baptised in St Mary’s Church, East Ilsley, in 1912, and the family made their home in Newbury.

Rex enlisted in the Royal Berkshire Regiment in Newbury in 1914 and was subsequently transferred to the Hampshire Regiment, gaining steady promotion up to the rank of Sergeant.  He was killed in action during the Third Battle of Gaza, and the Newbury Weekly News carried two reports a month later:

Sergt. R.G. Wells, who was killed in action in Palestine on November 2nd, was the youngest son of Mr and Mrs Mark Wells of East Ilsley, and leaves a widow who is resident at Singlewood, Cromwell Road, Newbury.  Prior to joining up in December 1914 in the 3rd Battalion Royal Berks, he was in the Newbury Town Band.  He was drafted for Egypt in February and was transferred to the 1/8th Hants Regiment, since when he has not returned to his home on leave.  The last communication from him was received on November 1st.  Three other brothers are serving with the forces, two in France and one in training in England.

The Sergeant Major of the same regiment in which Sergt. R.G. Wells served has written to Mrs Wells to say her husband was killed instantaneously by a shell when leading his platoon into action.  He was buried where he fell, together with the company Captain, who also was killed on that occasion.  Sergt. Wells has three brothers serving with the forces in France.

A year afterwards, Elizabeth placed a memorial notice in the paper:

In ever proud and loving memory of my dear husband, Sergt. R.G. Wells, killed in action on November 2nd 1917.

Gone is the one we loved so dear,
Gone is the voice we longed to hear,We miss him and mourn him in sorrow unseen
And dwell in the memory of days that have been.
Years may pass, my loved one,
But your face will never fade,
For I love you still so dearly
Though you’re silent in the grave.
Only those who have loved and lost know the meaning of the word “gone”.
From his sorrowing Wife and little son.

Rex is now buried in Gaza War Cemetery, and was also commemorated on a tablet in the Baptist Church in East Ilsley.  This memorial was restored and moved to St Mary’s Church following the closure of the Baptist Church. 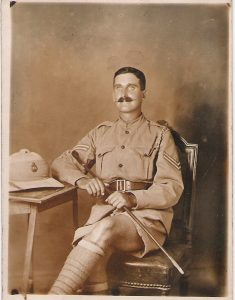 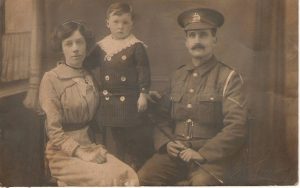 Rex and Elizabeth with Rex junior* 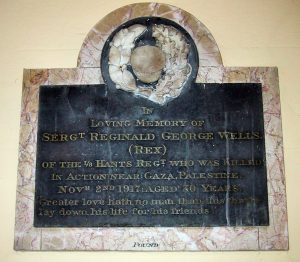