George was the son of the local doctor, and he worked as his father’s chauffeur.  He was a simple and gentle man, and it was a shock to the whole community when he was called up at the age of 40.

The rigours of Army life and the prospect of going to war were too much for him, and his mental health cracked under the strain.  He was discharged without seeing active service, but soon afterwards took his own life.  Because he died after being discharged he is not commemorated by the CWGC, but he was regarded locally as equally a victim of the war, and he is therefore remembered on the memorial.  George is buried in St Mary’s churchyard at East Ilsley.

The photograph shows George and his wife Barbara on their wedding day. 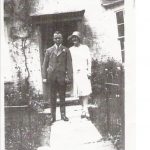