The Hall family lived in a wooden bungalow at Gore Hill Farm, between East Ilsley and Chilton.  Alan was the eldest child, born on 21 February 1921; he and his brothers, Alfie and Henry, went to school in East Ilsley.  They also had a sister, Margaret, called Peggy.  The children’s father, known as “Bungalow Bill”, was a familiar figure in Ilsley, selling and delivering firewood. After leaving school, Alan worked on his grandfather’s farm at Wash Water near Newbury.  When war was declared he volunteered to serve in the Royal Navy, though being in a reserved occupation, he could have chosen to remain on the farm.  Early in the war Alan was based in Liverpool, and it was there that he met Jean. They married in the summer of 1942, but tragically their time together was to be short.

Alan’s CWGC entry shows his unit as “HMS President III”.  This is a little misleading, as this was not a ship but a Royal Navy shore accounting base.  Alan was serving on board the SS Empire Turnstone, a steam merchant ship of 6,000 tons operating as a Ministry of War Transport.  As a DEMS (Defensively Equipped Merchant Ship), she was fitted with guns for defence against air and surface attack, manned by a gun crew of seven.  Five of them, including Alan, were Royal Navy gunners with the rank of Acting Able Seaman, and the other two were from the Maritime Regiment of the Royal Artillery.

On 21st October 1942 the Empire Turnstone was in convoy, bound for Louisiana, when she experienced engine trouble and was forced to turn back.  In the early hours of the 22nd, she was torpedoed and sunk by the U-boat U-621 south-west of Iceland.  There were no survivors.

Alan is commemorated on the Portsmouth Naval Memorial. 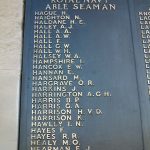