Nicholas Edward Mount was born in September 1900 in Reading, the youngest child of a prosperous family.  Like his older brothers he was educated at Bradfield College, leaving school in July 1918.  For the last months of the First World War he served at an RAF Ground Training Unit at Shorncliffe, but (to his disappointment) not in time to see active service.  After the war he went to Assam in India where he was a tea planter, remaining there for nearly twenty years. He also served with the Assam Valley Light Horse during his time in India.

Nick married his wife, Dorothy, in Calcutta and their only child, Brian, was born in India.   Not long afterwards, the family returned to England and came to East Ilsley in the late 1930s.  Nick, who was also a talented artist, took over the licence of the Crown & Horns, but was sadly not to be its landlord for long.  On 3 September 1939 Britain declared war on Germany, and on the same day Nick Mount was granted an emergency commission as Second Lieutenant in the Royal Engineers.

The Royal Engineers were responsible for the operation and maintenance of ports and railways, and Brest in Brittany was to be a major supply port for the British Expeditionary Force in France.  General stores, ammunition, motor transport and fuel were shipped to Brest for onward transfer to inland depots.   On Thursday 9 November 1939, Nick was killed when the petrol ship MV Pacific Coast was destroyed by an internal explosion in Brest harbour.  Thirty-four others also died, including French dock workers, crew members of the Pacific Coast and her captain.  Nick was the only Army casualty.

Nick is buried in the town cemetery at Lesneven, not far from Brest.  He is also commemorated at Bradfield College. 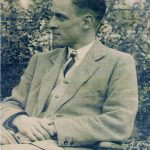 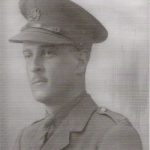