Alfred James Minchin was born in 1887 in Hermitage.  James, his father, was a farm worker from Bradfield, and the family seems to have moved several times during the 1890s, living in Pangbourne, Compton, and then East Ilsley where they lived in Cow Lane.  Alfred had two younger sisters, Ada and Beatrice*.   Their father died in 1899 at the age of 32.  Alfred at first worked on the farm, but in 1904 he joined the Army, enlisting at Newbury in the Royal Berkshire Regiment.  As a 1st Battalion man, he would have spent time in Ireland, and was to be among the earliest troops to embark for France on the outbreak of war.

With the 1st Royal Berks, Alfred was at the battle of Mons and in the subsequent retreat across the Marne and the Aisne, and his battalion was engaged in the same action in which Harry Naylor was killed.  They then moved up to take part in the First Battle of Ypres, arriving on 20 October.  On 15 November, a cold, rainy day of ceaseless shellfire, Alfred was killed in action at Zonnebeke, along with eight others of his battalion.  Notice of his death appeared in the Newbury Weekly News in January:

Gone to another Home above

But not from memory or love.

And the first anniversary was marked by another touching memorial notice:

In ever loving memory of Corpl. A.J. Minchin who was killed on November 15th 1914.

One of the best that God could lend

A loving and devoted Sweetheart; a true and faithful friend.

We miss him and mourn him in silence unseen

And dwell in the memory of days that have been

Alfred’s will left all his effects to his fiancée, Edith Naish.

For the whole of the war, the ground where Alfred fell was on or near the front line, and so he was either not recovered or his grave was lost.  He is commemorated on the Menin Gate.

*Beatrice was the mother of Leslie Carter, whose name appears on the Second World War memorial plaque. 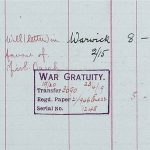 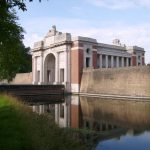 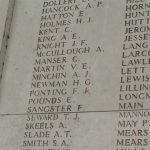