Harry Thomas Naylor’s mother was Ilsley born and bred.  Bess Hibbert’s father Thomas was a blacksmith like his Hibbert forebears, and her mother Ellen was a Wells.  Bess was born in the Sun Inn, which was run by her family for many years.  She married Henry Naylor, a sergeant in the Royal Horse Artillery, and their children were born at various Army bases.  They often stayed in East Ilsley between postings, and were well known to everyone in the village.

Harry, the eldest of the Naylor children, was born in Kildare, Ireland, in 1894.  Along with his younger brother Jim* he joined the Army in 1912, and soon after the declaration of war Harry arrived in France with the 1st Battalion of the King’s Royal Rifle Corps on 13 August 1914.

Following the withdrawal from Mons, the Allies retreated to the Marne river, from where they began to advance again, driving back the German Army to the Aisne.  On 10 September, near the village of Hautesvesnes, Harry’s battalion came upon an enemy rearguard.  The battle that followed ended with the surrender of the Germans, but Harry was killed in action.

According to The Annals of the K.R.R.C.:

The losses to the Battalion, who in this fight so well lived up to their glorious traditions, were 4 officers wounded, 10 NCOs and Riflemen killed, and 60 wounded, not a great price to pay for the annihilation of a whole enemy’s battalion.

But a great price indeed for the family and friends of Harry Naylor, who lies buried in a small cemetery in the village of Montreuil-aux-Lions.

*  Jim Naylor was one of the contributors to Lyn Macdonald’s books on the First World War, and some of his experiences are told in “1914” and “They Called It Passchendaele” 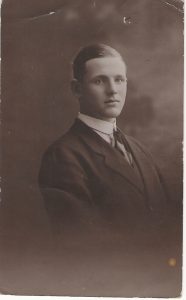 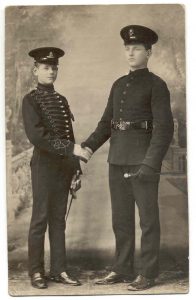