Ben Ashwin Conway Matthews was born in East Ilsley in 1881 to George and Sophia Matthews.  He was the youngest in a very large family with deep roots in the village, living in Cow Lane.  Carpentry was the family trade, but Ben was more adventurous. In 1899, at just seventeen he joined the Army, going with the Royal Berkshire Regiment to South Africa where he served throughout the Boer War, earning both the Queen’s and the King’s South Africa Medals.  He also served in India.  By 1914, he had completed his full term of service, and was on the National Reserve, available for call-up in the event of war.

Ben’s time in France with the 2nd Battalion Royal Berks was spent in trenches halfway between Armentieres and Bethune, switching between reserve and front-line duties.  They were under continual fire, with the German front line as close as forty yards away in places.  Conditions were unpleasant, with the wet trenches needing to be constantly pumped out, and men were despatched daily to hospital, many suffering from frostbite and trench feet.  At some point Ben too went to hospital, his condition serious enough for him to be sent back to England to the military hospital at Cambridge.

News has been received that Benjamin Matthews has died in Cambridge Hospital from wounds received in action.  The deceased was called up from the Reserve when the war broke out and rejoined his old regiment, the Royal Berks.  He has two brothers now with the colours.

It was not a wound that had proved fatal, but diphtheria.  Ben is buried in Cambridge City Cemetery. 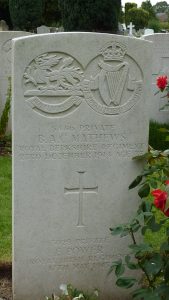 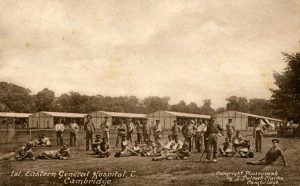 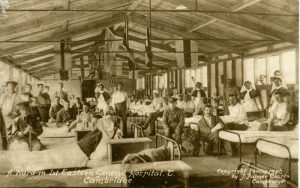