Edward George Mills was born in 1886.  He was of sound Ilsley stock, as his mother Martha was a Welch from West Ilsley, and his father, Edwin, from the Mills family of East Ilsley.  Both families were long established in their respective villages.  Edwin Mills was a farm worker and woodsman, with a sideline in poaching: understandable given that Edward was the eldest of thirteen children. They lived in Cow Lane.

Like many local lads, Edward began his working life on the farm, but then decided to try life as a soldier.  He enlisted in the Royal Berkshire Regiment in 1908 and saw service in India, where he was present at the 1911 Durbar celebrating the coronation of George V, and was awarded the Delhi Durbar Medal.  Returning with the 2nd Battalion from India on the outbreak of war, he landed in France in November 1914, along with Albert Williams who had joined up two weeks before him.  Holding the line in conditions which would have been especially miserable in contrast to India, the battalion was also engaged in the Battle of Neuve Chapelle.  However, Edward was not to fall in a battle, but in the ordinary day-to-day defence of the trenches.  The war diary is terse in its account:

Pte. Edward Mills, whose death is reported, is spoken of as a fine soldier and a good comrade; his death was deeply regretted in his regiment, in which he was deservedly popular.  He was instantly killed outside a trench.  The parents have received a card of sympathy from the King and Queen.

Edward lies where his comrades laid him to rest at White City, a small battlefield cemetery at Bois Grenier, not far from Armentieres. 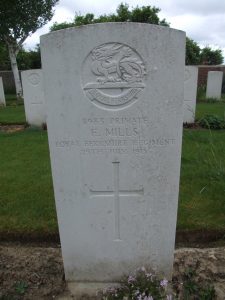