Frank Brown was born in East Ilsley in 1886.  He and his elder brother George were brought up by their grandparents, John and Charlotte, at Whitehall Cottages, Abingdon Road.  Everyone in East Ilsley would have known Frank, as he was the village postman.  A few weeks after war was declared, Frank enlisted in the Army.  His mother and stepfather lived in Cosham near Portsmouth, and this is probably what led to his choice of the Hampshire Regiment:  a decision that was to take him to Gallipoli.

Frank’s battalion embarked at Liverpool in early July 1915, sailing via Alexandria and Lemnos, finally arriving on the Gallipoli peninsula on 6 August where they came ashore at Anzac Cove.  They were in action in the assaults on Sari Bair and Hill 60, and it was in the latter that Frank was killed on 28 August.

Frank’s death was announced in the Newbury Weekly News a month later, and the paper also carried an obituary.

News was received here on Tuesday last that Frank Brown, of the 10th Battalion Hants Regiment, had been killed in action on the 28th August.  This young man was a native of East Ilsley and was 28 years of age.  When a little boy he started work for Mr Taylor, builder, who took a great interest in him.  When he was fourteen years old he took over the duties of telegram messenger under the same master, who was sub-postmaster.  He afterwards assisted in the Post Office, and later was taken on the staff and became acting postman to West Ilsley (sic).  Brown joined the Army with others on 11th September 1915 (sic, should be 1914) after a recruiting meeting held here, at which Major Henderson of the Berks Yeomanry, who were then at Churn, was the principal speaker, and was sent to Ireland for training, and was soon attached to the signalling section of his battalion.  Eventually he was sent with his regiment to join the Mediterranean Force, leaving Plymouth in the latter part of July.  Deceased was of a very quiet disposition and greatly respected by everyone, and the sub-postmaster speaks of him as a most trustworthy and willing servant.  This is the tenth man from the East Ilsley active service list who has given his life for his country.

Frank has no known grave and is commemorated on the Helles Memorial, which stands at the tip of the Gallipoli Peninsula and can be seen from ships that pass through the Dardanelles. 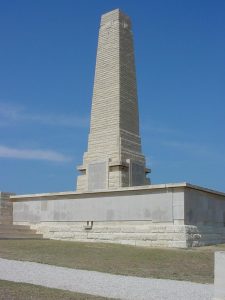