Edward Whitlock was born in Salhouse, Norfolk in 1896.  He was living there in 1901 with his parents and his brother William, who was two years older.  Their father, also William, was a gardener.  By 1911 the family had moved to Truro in Cornwall, where Edward was working as a blacksmith and his father and brother were gamekeepers.

By 1914 the Whitlock family was living in East Ilsley, as witnessed by the brothers’ names on the Active Service Roll for East Ilsley. Edward’s entry on the Royal Navy & Royal Marine War Graves Roll gives his father’s address as The Gables (now Church Farm House). Both brothers served with the Royal Navy: William on HMS New Zealand, and Edward on the ill-fated HMS Monmouth.

Edward enlisted in the Navy in December 1911.  His service record tells us that he was 5’6¼” tall with brown hair and brown eyes, and also that he added three years to his age.  This may have been for pay reasons, as at 15 he would not have been too young to join the Royal Navy.  Initially a stoker, a few months later he switched to being a Sick Berth Attendant, and worked mainly ashore at Plymouth Hospital and the Royal Naval Barracks at Devonport.

In August 1914 Edward was posted to the armoured cruiser HMS Monmouth, sailing from Plymouth on 6 August bound for the South Atlantic, where the ship was to join Rear Admiral Cradock’s squadron to be based out of the Falkland Islands.  Cradock was tasked with hunting down the German squadron commanded by Vice-Admiral Graf von Spee.  Accordingly the British ships headed for the Pacific.  The last port of call was Valparaiso, and Edward may have gone ashore for the last time there.

The enemy was engaged on 1 November off Coronel on the coast of Chile.  The Monmouth was weakly armed and her crew inexperienced.  Badly damaged by a shell from the German cruiser Gneisenau, and on fire, the Monmouth was finally sunk by the Nurnberg.  Admiral Spee’s son, on board the Nurnberg, was quoted in the Naval Review:

We turned to the second and found it to be the Monmouth, heavily damaged. She had a list of about 10 degrees to port. As we came nearer she heeled still more, so that she could no longer use her guns on the side turned towards us. We opened fire at short range. It was terrible for me to have to fire on the poor fellow who was no longer able to defend himself. But the colours were still flying and when we ceased fire for several minutes, he yet did not haul them down. So we ran up for a fresh attack and caused him to capsize by our gun fire. The ship sank with flying colours and we were unable to save a single man on account of the heavy sea, which made it impossible to lower a boat.

The Battle of Coronel was the first defeat suffered by the Royal Navy for over a century, with the loss of the Monmouth along with HMS Good Hope, and the entire  crews of both ships.  There are memorial plaques at Coronel and in Stanley Cathedral in the Falkland Islands, and Edward is commemorated on the Plymouth Naval Memorial. 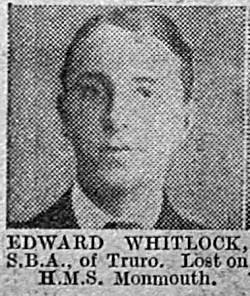 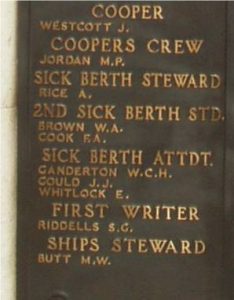 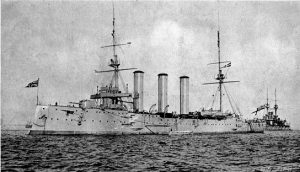