William Arthur Prior was born in East Ilsley in 1878, one of nine children of Frederick Prior, the miller, and his wife Ann.  When William was 11 his father died, and the family moved from the Windmill to a cottage in Abingdon Lane.  William worked as a butcher’s boy, but later joined the Army.  He does not appear in the 1901 census, and was almost certainly serving overseas.  By 1914 he had served his full term and was assigned to the Reserve: the Active Service Roll describes him as a “time expired man who voluntarily rejoined the Colours”.

On 11 August 1914 William attested at Kingston with his old regiment, the East Surreys.  He was recorded as single, 5’4” tall, weighing 114 lbs and with brown eyes and dark brown hair.  He was then a groom, and it is likely that at some point he had lived or worked in Compton, as his name appears on the roll for both villages.  He would probably have been sent for a period of training, as he did not land in France until 3 December, on his way to join the 1st Battalion.  (On that very day, the Battalion was being inspected by King George V at St Jans Cappel.)

Just four weeks later, William was killed at Wulvergem, south of Ypres.  The war diary gives a graphic account of the events:

TRENCHES N.E. WULVERGHEM Thaw set in, wet during day. Heavy shelling of enemy trenches by our guns.  The Germans replied to this when a large shell fell in one of the trenches (A Co’s support trench) burying 5 men.  Pte. Owen and another man at once proceeded to dig these men out, when another big shell fell close by, upon which the other man stopped work.  Pte. Owen continued his digging and was in the act of dragging out one of the buried men when a third shell fell blowing him to bits.

William is commemorated on the Menin Gate in Ypres.  He is also remembered on the Compton War Memorial. 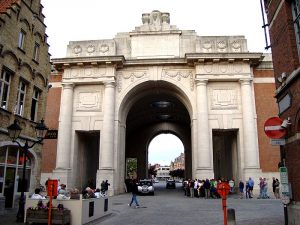 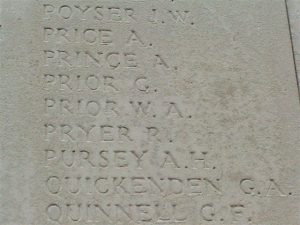