Francis James Woods was born in London in 1897.  Sadly Frank lost his father before he was three, but in 1904 his mother, Mary Anne, married Francis Cross, a police officer from Berkshire.  Francis was widowed with four children, and he and Mary Anne went on to have three daughters, so Frank quickly became part of a large family in East Ilsley, where his stepfather was the police sergeant.

The Newbury Weekly News carried the following report on 18 January 1917:

News was received on the 10th January that Bugler F.J. Woods, 18th Batt. Welsh Regt., had been killed in action by an explosion on the 30th December.  His mother received the sad news in a letter from the Chaplain of his regiment:  she has also received a letter from one of his chums.  The captain wrote expressing his sympathy, and saying he was one of his smartest men, sadly missed by all.  The lad was 19 years of age, and had lived in the village nearly all his life.  He was always merry and bright, and a favourite with everyone; always willing to perform any act of kindness that lay in his power.  He was one of the leading members of the Boy Scouts, taking a prominent part in the band, and was employed by Mr Goddard, the builder.  He joined up at the recruiting meeting held in the Old School on the 2nd February 1915, and three days later he was sent to Porthcawl to commence training; he was removed to Aldershot on the 11th September.  He went with his regiment to France on the 3rd June last, and was sent straight away to the firing line as a stretcher-bearer.  His mother has heard from him regularly.  The last letter received was dated Christmas Day, and in it her son told her that he was going into the trenches the following day; he always wrote cheerfully, and made light of the hardships he had to bear.  Everyone in the district extend their sympathy to the bereaved mother and family, and it must be some comfort to them to know what a fine fellow he was, joining up in the early stages of the war, at the first call, and now giving his young life to the King and Country, and that his life will not be given in vain, for it will be a help and example to others.  And as long as we have young fellows like Bugler Woods, who are ready to do their duty without counting the cost, victory must surely come in the end.

Frank was buried at Priez Farm near Combles on the Somme battlefield, but the graves there were later destroyed by shellfire, and he has a special memorial in Guards’ Cemetery, Combles.

Not now, but in the coming years, It may be in the better land; We’ll read the meaning of our tears, And there, sometime, we’ll understand.

In loving and proud remembrance of Frank, the dearly loved son of Reserve Sergt. and Mrs F.J. Cross, East Ilsley, who was killed while on duty as stretcher bearer in France on December 30, 1916, aged 19 years.  Thou teachest that a faithful death is surest victory.  Ever fondly remembered by father, mother, sisters and brother. 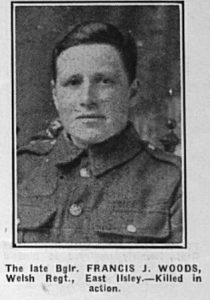 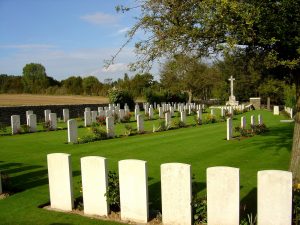