The Deacons are one of the oldest East Ilsley families, and can be traced back to the 1600s.  William Arthur Deacon was born in 1879 to George and Elizabeth Deacon: George was a first cousin to Harry Warren’s mother Amelia.  The family home was at Bath Cottages, which stood along Cow Lane where it begins to climb to Sunrise Hill.  William worked for a time as a carter on one of the farms in the village, but later moved to London and became a cook.

In January 1912 William married Emily Preston in Hampstead, and their first child, Emily, was born in November, followed in 1915 by another daughter, Irene.  The family lived in Highgate Road, close to Hampstead Heath.  William did not enlist before 1916, when conscription was introduced.  As a married man with young children, he would not have been among the first to be called up.  He was eventually assigned to the 19th Battalion of The Queen’s (Royal West Surrey) Regiment.

The range of non-combatant duties in the Army included construction and repairs of roads and railways, loading and unloading supplies and ammunition, and burying those who died behind the lines.  Many infantry regiments, as well as the Royal Engineers and Army Service Corps, had special labour battalions, and in early 1917 these were brought together to form the Labour Corps. The 19th Queen’s was one of these. (A large percentage of men in the Labour Corps were below the fitness standard required for front line duty.)

William’s battalion, by now part of 127 Company of the Labour Corps, sailed to Boulogne on 12 March 1917 bound for Mont St Eloi, north-west of Arras. There they worked on the railway, widening and laying new track. William’s own record has not survived, but as he was a cook in civilian life he may well have served in the catering department.

On 26 May 1917 William died at No.12 Stationary Hospital at St Pol-sur-Ternoise from cerebro-spinal fever, an infectious disease which was rife at the time.  The chaplain wrote to Mrs Deacon:

Dear Madam
You will already have heard the sad news of your husband’s death, but I think you will like a line from me to tell you about it. When I wrote to you last I quite hoped that he would have recovered, but last evening he suddenly grew worse & became unconscious, remaining so until he quietly passed away at ten minutes past 11 this morning- you may be comforted to know that he had no pain & was spared suffering. I fear also that if he had recovered he might never have got back his usual condition. I am so sorry for you & hope you will accept my true sympathy with you in your sorrow. It is hard to be far away from those you love at such a time, but you may be sure he had the very best attention & care.

William is buried at St Pol in a military section adjoining the town cemetery. 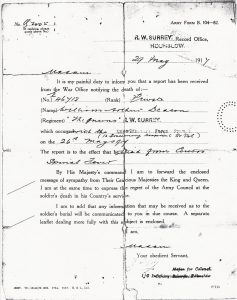 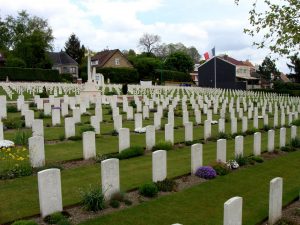