Gavin Ralston Mure Caldwell was born in Kent in 1897, the only child of the Rev. William McKennal Caldwell and his wife Jessie Elsie.  The Rev. Caldwell was Rector of East Ilsley from 1913 to 1916.  Gavin attended Clifton College in Bristol, joined the Officers Training Corps there and was gazetted Second Lieutenant in the Argyll & Sutherland Highlanders on 21 October 1914.  Transferred to the Coldstream Guards in August 1916, he went to France in December.

Gavin saw action in the Third Battle of Ypres (Passchendaele), where on the first day his battalion took heavy casualties.  He was left in command of his company as the sole surviving officer.  Tragically his luck ran out just a month before the Armistice.

From the Appendix to the battalion war diary covering 9 October 1918:

The Germans were very strongly posted in prepared positions East of BEAUVOIS, and also along the main road running from CAMBRAI to LE CATEAU.  While Nos 2 & 3 Companies were trying to consolidate this line they suffered several casualties and Lieut: G.R.M. CALDWELL was wounded and died from his wound on reaching the Dressing-station.

Gavin’s death was reported in The Times on 19 October:

Lieutenant Gavin Ralston Mure Caldwell, Coldstream Guards, who fell on October 9, was the only child of the Rev. W.H. Caldwell (now serving as Chaplain to the Forces, Egyptian E.F.) and Mrs Caldwell, and a great-nephew of the late Field-Marshal Viscount Wolseley and of General Sir G.B. Wolseley.  He was educated at Clifton College, whence he volunteered for service with a battalion of the Argyll & Sutherland Highlanders, from which he was transferred to the Coldstream Guards.

Gavin’s grave is in the village cemetery at Wambaix: he is one of only five British soldiers buried there.  (By a curious coincidence, one of the others was the son of the Vicar of Wantage.)  He is also commemorated on the war memorial at Fetcham, Surrey, where his father was Rector after leaving East Ilsley.

Mrs Caldwell died in 1936.  The Times reported that she left £1,000 to the Cuddesdon Theological College, Wheatley, Oxford, in memory of her son. 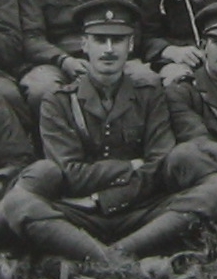 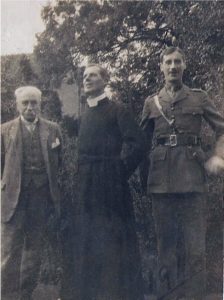 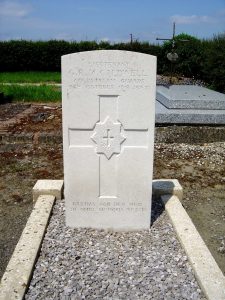