Leslie was one of a large family of five boys and two girls who lived in Cow Lane, and later at Churchside.  His father, Fred, was the Sexton at St Mary’s Church and a bellringer there.  Leslie was born on 21 November 1923 and christened Leslie Alfred, probably after his mother’s brother Alfred Minchin who was killed in the First World War.  After leaving school Leslie joined the Merchant Navy.  Home on leave, he called on his old teacher to thank him, and  Mr Allen recalled how proud Leslie was in his chosen career.

In 1941 Leslie was serving aboard the SS Pacific Star, a merchant ship of the Blue Star Line which in peacetime carried beef from South America to Britain.  Commandeered by the British Government on the outbreak of war, she continued to bring vital food supplies across the Atlantic.  These were dangerous waters, constantly patrolled by enemy aircraft and U-boats seeking to cut off the Allied supply lines.   One evening, the ship being anchored off the Cape Verde islands, Leslie was among a group of crewmates returning from a trip ashore when their dinghy capsized and he was lost overboard.  He was 17. (A year later the Pacific Star was torpedoed and sunk.)

Leslie’s war service entitled him to three medals, the 1939-1945 Star, the Atlantic Star, and the War Medal.  These were issued posthumously to his family.

Official commemoration by the Commonwealth War Graves Commission was granted to all Army, Royal Navy and Royal Air Force personnel who died within the qualifying dates for both World Wars, regardless of the cause and circumstances of death.  However, Merchant Navy personnel only qualified for commemoration if they died on duty and of a war-related cause.  Since Leslie died as the result of an accident, he is therefore not commemorated by the CWGC.  Local war memorials, on the other hand, were organised by the community who were free to make their own decisions; and Leslie’s name has its right and honoured place on the East Ilsley War Memorial. 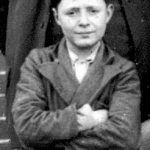 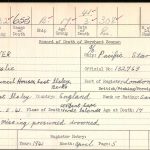