The Lailey family came originally from Curridge, where George was born in 1895, the eldest son of George Lailey senior, a woodman and farm worker, and his wife Elizabeth.  They moved to East Ilsley in about 1909, where they lived in Abingdon Road.  Young George worked on the farm as a carter.

In September 1914 George enlisted at Newbury in the Hampshire Regiment, and was sent to Mullingar in Ireland for training.  He was part of the 11th  Battalion, a new type of service battalion which became known as Pioneers.  Their function was to relieve the infantry from some of the practical tasks required aside from combat duty, such as wiring, digging wells and trenches, and construction work.  They were also a trained and capable fighting force.  George’s battalion embarked for France on 18 December 1915, and for the next two years the Pioneers were occupied on various fronts.  They were in the Loos sector, the Ypres salient and on the Somme, sometimes working behind the lines building roads, camps, rail and tramways, but often coming under fire while repairing trenches and wire in the front.  They were to prove themselves in battle too:  the History of the Royal Hampshire Regiment has this to say:

Their worth as Pioneers they had long ago established, but their chances of showing that they would fight as well as they could dig and wire and make roads had been scanty, so that this fortnight of fighting was their “crowded hour”.

With the spring of 1918 came the final great German offensive, known as the “Kaiser’s Battle”.  The last fortnight of March saw the 11th Hampshires engaged in fierce combat, attempting to stem the German advance and forced to retreat many miles across the Somme valley, fighting rearguard actions along the way.  On 30 March, east of Amiens near Le Hamel, the Pioneers suffered heavy losses while counter-attacking, and it was then that George Lailey was killed in action.

A brief item appeared in the War Notes column of the Newbury Weekly News on 9 May 1918:

The War Office have notified Mr George Lailey that his eldest son, Pioneer George Lailey of the 11th Hants, was killed in action on March 30th.  He joined up in September 1914 and was trained in Ireland, leaving for France at the end of the following year.

George has no known grave, and is commemorated on the Pozieres Memorial, on the Amiens-Bapaume road which passes through the centre of the Somme battlefields. 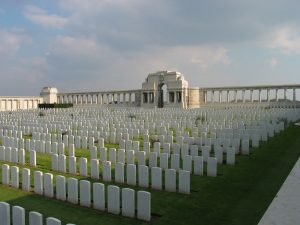 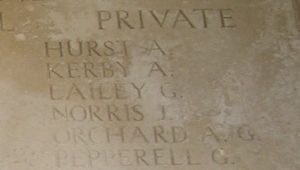