John’s grandparents settled in East Ilsley at the turn of the century.  His grandfather was a racing man from Ludlow who married a Compton girl.  Their son Tom served in the Royal Field Artillery during the First World War, and his name can be seen on the East Ilsley Roll of Honour along with that of his brother Jack.  Afterwards Tom Goodwin made the Army his career.  He married Margaret, an Irish girl, but sadly she died at the age of 32 soon after the family returned to England from India.  John, who was only 19 months old when his mother died, and his elder sister Annie remained in East Ilsley with their grandparents, their aunt Edith and cousin Norah.

When the war began, John already had three years experience in the Royal Navy.  He served as radio operator aboard HMS Laforey, an L-class destroyer launched in 1941.  The Laforey saw much action in her short life, mostly in the Mediterranean on Malta operations and anti-submarine patrols.  She also served as escort to Atlantic convoys and took part in the landings at Madagascar, Sicily and Anzio.  On 29 March 1944 the Laforey joined in a hunt for the U-boat U-223 north of Palermo; early the following morning the U-boat was cornered and sunk, but not before firing three torpedoes at the Laforey, which was struck and sank in under four minutes.  182 of the ship’s company lost their lives; among them was John Goodwin.

News has been received by Mr and Mrs Harry Pearce of the presumed death of their nephew, John Edward Goodwin, who was serving as a wireless operator on one of H.M. destroyers, which was sunk in March.  John, who was born in India in 1920, came to England a year later.  His mother died in 1922, and he was brought up by his father’s relatives at East Ilsley, as his father was in the Army.  He was educated at East Ilsley Council School and later, Newbury Grammar School.  He was a bright and lovable lad, both at Newbury and later at Gosport where he had his naval training.    He received a silver cup for setting up a record for his ship in his examinations.  He has done much war service at sea, joining the Navy in 1936.  Much sympathy is felt for his relatives and friends.

John is commemorated on the Portsmouth Naval Memorial. 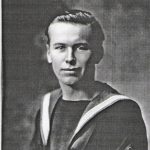 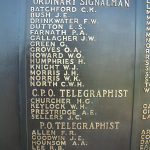 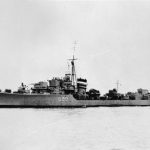