Victor Thornton Gibbens was born in Broadstairs, Kent, in 1887.  Those were the days of horse-drawn cabs and Victor’s father was in the cab and carriage trade.  This is doubtless how Victor gained his experience with horses, which eventually brought him to East Ilsley where he worked in one of the racing stables.

In 1911 he married Emily Brown, daughter of Harry Brown, the village painter and decorator.  Emily was a cousin of Frank Brown.  Victor and Emily set up home in a cottage in Cow Lane (now 1 Meadow View).  Two children were born to them, Bill in 1912 and Katharine (always known as Cissie) in 1914.

In the summer of 1915 Victor enlisted in the Army Veterinary Corps as a horsekeeper, and was posted to the AVC Depot at Woolwich for a few weeks before embarking for France on 12 September.  He remained with the AVC for two years, gaining a promotion to Lance-Corporal, until he was transferred to the Cheshire Regiment in September 1917.  The 6th Cheshires had been all but wiped out at the end of July, and Victor was one of many men drafted as replacements.

Just a month later the battalion went into action in the second Battle of Passchendaele.  On 29 October Victor was killed in action, probably while out on a patrol from the front line near Gheluvelt.  From the Battalion History:

At Gheluvelt battle patrols sent out by B and C Companies suffered rather heavy casualties on October 29th, six being killed and nine wounded.

Victor has no known grave, and is commemorated, with Ted Gardener, on the Tyne Cot Memorial. 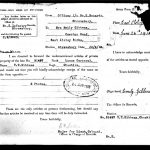 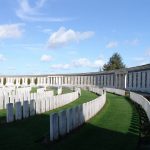 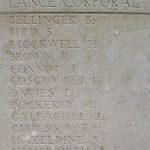